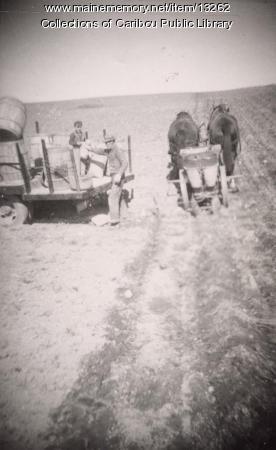 For seed, potatoes are cut so there are at least one but generally two or more "eyes" in each piece. At planting time, a potato planter was used.

Farmers, "dumped the barrel of cut seed in the seed hopper behind the seat and two sacks of fertilizer in the fertilizer hopper in front of it. ... control[s] let some seed in the picking chamber..., [the farmer] lowered the furrow opener (plow) in front and the covering disks in the rear and placed the planter in gear automatically.

"The fertilizer was forced from the hopper into two rubber tubes that ran down outside the coulter openers (sidling disks) that split open the fresh soil and deposited the fertilizer so that it would not come in contact with the seed.

"The spacing of the seed in the row was dependent upon the size of the sprocket wheel used on the intermediate shaft.

Inside the potato planter, "...pickers, revolving on the main axle, passed through the picking chamber containing the seed. As each picker passed through, it picked out one piece of seed, and when the picker passed downward, the seed was forced off the picker point and dropped down into the trench made by the furrow opener (plow) and covered by the disks at the rear." George Whitneck, "A Farmer Lives in Maine" (1947)