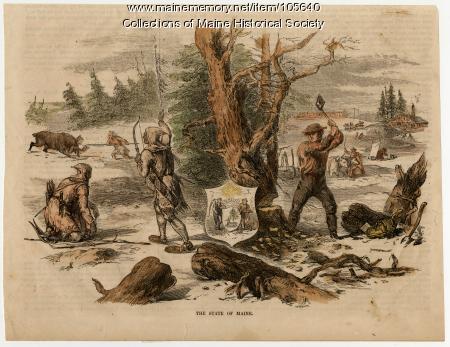 While the doctrine of Manifest Destiny is most often associated with expansion in the American West in the late 1800s, President Monroe invoked it in 1823. Manifest Destiny is the American expression of the Doctrine of Discovery—the idea that the United States was ordained through Christianity to expand and spread democracy and capitalism across the entire North American continent. This philosophy was used to justify the forced removal of Native people from their Homelands and to exploit their land as a resource.

This allegory of "Scenes from the State of Maine" places the Maine State seal in the center of “progress”—the felling of a trees and harvesting of timber. On the right, or east side of the image are visual passages of “civilization,” including a tidy log cabin, settlers plowing a field, and a city visible in the distance. To the left, or west are Wabanaki people wearing snowshoes and traditional dress of a century earlier. They are hunting a moose with bows and arrows in the winter, an attempt to show them as outdated. Native people relegated to the left side of artworks, being pushed metaphorically westward, became a popular propaganda image for the colonization of America.

Ballou's Pictorial Drawing Room Companion featured this image in the 1855 publication. Despite over 400 years of colonization, Wabanaki people continue to occupy their unceded Homeland, including in the state of Maine.