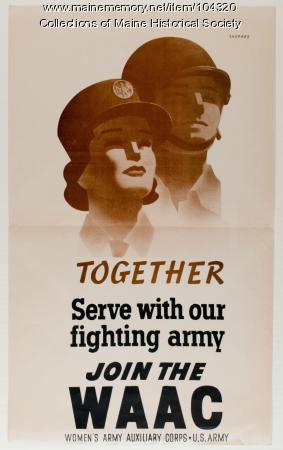 The Women's Army Auxiliary Corps (WACC) was established in May 1942, but did not take on active duty until July 1, 1943. It's first director, Ovete Culp Hobby (1905-95), was from Texas. The force was comprised of volunteer citizens in support functions, or additional personnel participating in police and military duties, usually part-time. The WAAC was disbanded in 1978, and integrated with male units.

With men fighting on the frontlines of the war, factories, military units, and other male-dominated industries were desperate for labor. Advertising propaganda— think Rosie the Riveter—encouraged women to leave their homes and join the World War II effort.

After the war, the same propaganda machines worked to force women back into domestic roles.