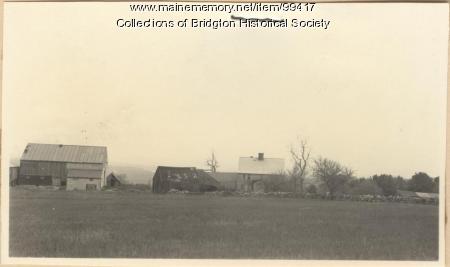 Narramissic, the Peabody-Fitch House, his the tax record for a single-family farmstead owned by Mrs. Margaret Monroe of Providence, Rhode Island, at the time of the record, ca. 1938. The card references a deed dated 1926; this is not the date of the photograph.

Mrs. Monroe and her family used the property seasonally until her death in 1986, when she bequeathed it to Bridgton Historical Society, which uses it as a historic house museum and a venue for programs, workshops, and events. Mrs. Monroe gave the property it's name, "Narramissic," which she understood to be an Abenaki word for "Hard to Find," which has a double meaning, as she and her husband had a difficult time finding just the right house to buy, and it is located off of a small dirt road, making it in fact hard to find for visitors.

The house was built by William Peabody in 1797, his daughter, Mary, married George Fitch, and they and their descendants occupied the property until Mrs. Monroe acquired it. Edwin Peabody Fitch, one of their sons, wrote his memoir, "Ninety Years of Living," about growing up in the house in the 1840s and 1850s, and Margaret Normann, Mrs. Monroe's daughter, wrote a memoir of her memories of the house in the 20th century, titled "Narramissic: 'Hard to Find.'" Both publications are available from Bridgton Historical Society.