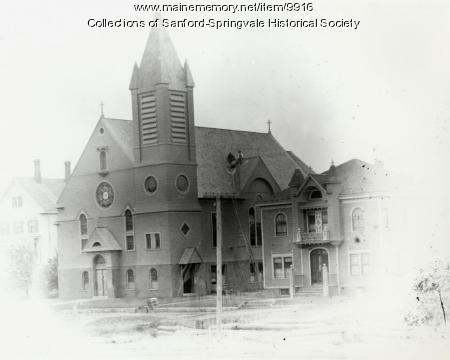 St. Ignatius, Martyr, Roman Catholic Church was built in 1893 to accommodate French-Canadian immigrants who were attracted to the steady work in the local mills. Not long after the photo was taken, the new St. Ignatius was built to the left of this church, while the old church became a parish hall and school.

The spire was removed and the building was painted white.

Due to the massive cost of upgrading the plumbing and electricity, the building was torn down in 2002.

Wentworth Street was renamed St. Ignatius Street in honor of the church's 100th Anniversary in the 1993. The convent remains on the grounds, but is used for formal functions as the last nuns moved to Waterville in the 1990s.