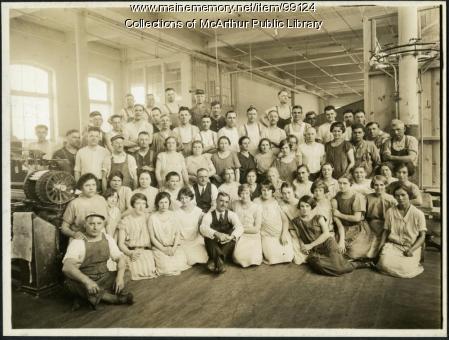 A group of Pepperell Mills weavers poses for a portrait in their work area at the mills, Biddeford, circa 1925.

Seen in the center of the fourth row from the front, wearing a sleeveless shirt, is George Matheos. George was a Greek immigrant who came to the United States from Alatsata, Turkey in 1913. He became a naturalized citizen in 1928. George lived and worked in the mills of Biddeford until his death in 1933.

Adele was born November 17, 1879, in Saint-Julien, Quebec. She married Napoleon in 1905 in Saint-Julien, and they emigrated to Maine within the next few years. At the time this photograph was taken Adele had 8 children at home, the youngest of whom would have been about 2-3 years old. Her husband was a teamster, who drove a team of horses transporting logs from the woods of northern Maine to the rivers and was gone for many months at a time.

This photograph is one of many from a scrapbook showing the many different departments at the Pepperell Mills at this time.