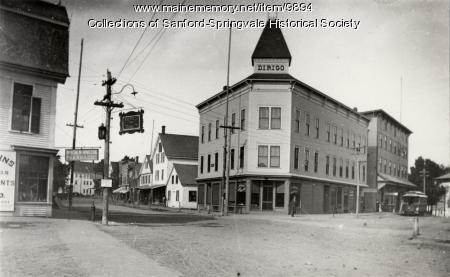 This photograph of Springvale Square, taken in the summer of 1899, shows the village as it appeared from the time of the completion of the Dirigo Block in 1897 until the heart of the village was destroyed in the great fire of April 14, 1905. The Dirigo Block was built by local developer Willis A. Fogg who was also responsible for the Fogg Block on Bridge Street, the building next to the trolley car. Charles H. Pierce, druggist, occupied the corner of the Dirigo Block from the time of its construction. Occupants of the building at the time of the 1905 fire were Frank Broggi, confectionary store, Rowe and Makin, general store, Charles H. Pierce, Dr. Byron M. Moulton, physician, George A. Goodwin, lawyer, Willis E. Sanborn, insurance and real estate, the Springvale Fish and Game Club, the Friendship Lodge of Odd Fellows, the Ruhamah Rebekah Lodge and the Fluellen Tribe of Red Men. Dr. Moulton also owned the drug store on the opposite corner. -- Sanford and Springvale, Maine In The Days of Fred Philpot, Second Edition, Revised, 1993, by Harland H. Eastman, p. 36. Print from a 4" x 6" glass negative.