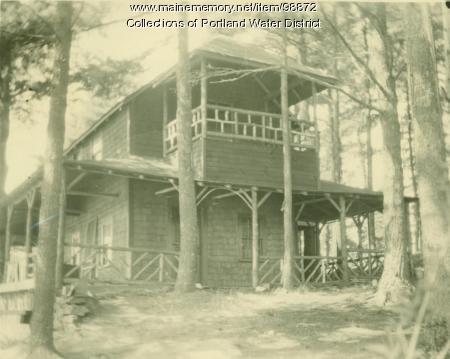 In 1913, the Portland Water District was successful in its efforts to restrict any bodily contact with Sebago Lake within two miles of its Intake. Indian Island, which is located about 3/4ths of a mile from the Intake, had a small summer colony in 1922. This colony was referred to locally as the Actors' Colony since three of the five summer homes were owned by famous Broadway actors.

In 1922, one of the actors, Malcolm Williams, who was married to equally famous Florence Reed, was caught in the water by the District's lake inspector by his cottage pictured here. Williams refused to pay the $20 fine and appealed the charge in Court. Because of his unwillingness to abide by the no bodily contact law, the District Trustees took the Williams’ cottage by eminent domain. At the same time, District Trustees also took the cottages of his neighbors and fellow Broadway actors. By 1925, the last two summer cottage owners on the Island sold to the District and the island was returned to its natural forested state.