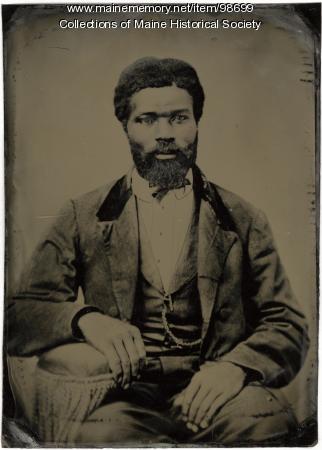 John Nichols, a native of Washington, North Carolina, was a slave who escaped to Union lines during the Civil War. He reported that while his master was fairly kind to the slaves on his plantation, a group decided to escape in 1862. They feared being sold to a plantation in Cuba -- or farther south in the Confederate states.

Some of the group were captured and Nichols, then about 14, became separated from the rest and found Union soldiers on picket near Portsmouth, Virginia.

According to Nichols, Dr. Alonzo Garcelon, Maine's surgeon general during the war, brought Nichols and several other former slaves to Maine at the end of the war to work on farms.

The tintype portrait may have been taken in 1873 when Nichols married Maggie E. Brooks, who was born in Canada, in 1873. The couple raised 10 children.

Nichols lived in Lewiston for about 60 years. He went to Boston to live with a daughter in about 1928 and died there in 1931.