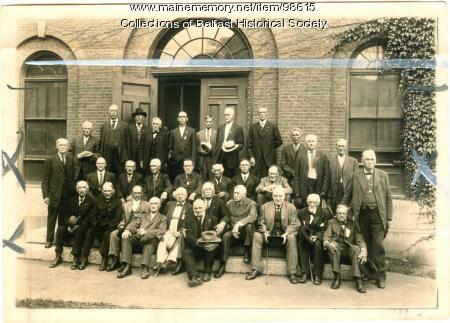 Members of the 26th Maine Regiment pose on the steps of Memorial Hall in Belfast for a reunion.

The group was part of the Waldo County Veterans Association of the Grand Army of the Republic. The 26th Maine was mustered in on September 23, 1862 and mustered out on August 17, 1863. They were an active regiment and participated in many battles in Louisiana, including Irish Bend and Port Hudson.

James A. Dunton, Co. G, seated, second from left, was the last surviving Civil War veteran in Waldo County. He died at age 93 on January 1, 1940 and was buried in Grove Cemetery, Belfast.