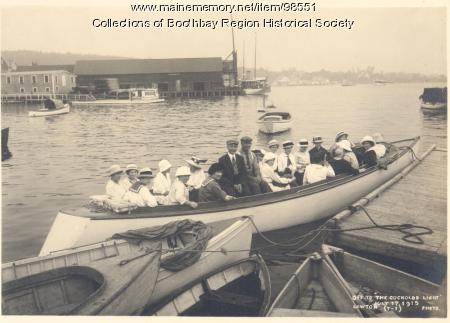 In this July 17, 1915 photograph, a group of Commonwealth Art colony students departs on an outing to the Cuckolds Lighthouse, on a barren rock off the tip of Southport Island.

From 1906 until around 1930, Asa G. Randall's Commonwealth Art Colony in Boothbay Harbor was a summer arts school for teachers and would-be artists in several disciplines. In 1912 it became the Commonwealth School of Art and Industry, by adding the summer sessions of the New School of Fine and Applied Arts. In 1913 music was added to the curriculum. That year there were 15 instructors and 200 students, ages 18 to 40, many with their families in tow.