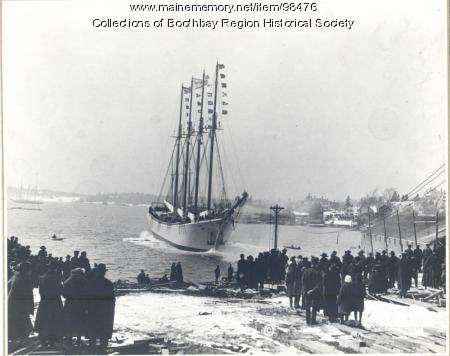 Built at the East Coast shipyard in Boothbay Harbor for Crowell and Thurlow, the Mary G. Maynard was launched on March 23, 1920. The Boothbay Register reported the launch was "as perfect a launching as ever took place" and that the schooner "dipped a pretty curtsy" as she entered the water. She was reputed to have been built in six months by thirty-five men. Her length was 184.1 feet, her beam 36.6 feet, her depth 14.9 feet. Her gross tonnage was 735, her net tonnage 654. Her home port was Boston, and her captain was Irving White, who sailed with a crew of eight.

In April of 1921, the Timberman (volume 22) reported that "what is said [to be] the first complete cargo of Georgia pine to come into Baltimore by sailing vessel since before the war arrived here the latter part of March. It consisted of 550,000 feet and came on the schooner Mary G. Maynard from Brunswick, Georgia, consigned to the Ryland & Brooks lumber company." Another trade paper explained that the load was brought by vessel rather than rail because the rates were lower.