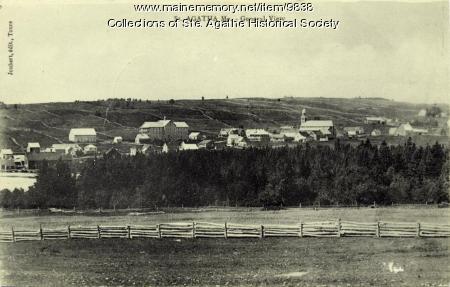 The town of St. Agatha is situated at the northeastern end of Long Lake of the Fish River Chain and on Route 162 from Frenchville to Sinclair. The town bounds Frenchville on the North and West, Madawaska and Long Lake on the East, and Township 17 Ranges 4 and 5 on the South.

St. Agatha set off from Frenchville and was incorporated on March 17, 1899, the 466th town of the State of Maine. The town bears the name of the parish which had been established ten years earlier in 1889.

The early inhabitants of the town were of French-Canadian and Acadian roots. They were attracted to the area for its natural resources and beauty. Farming and lumbering were the two major sources of income. Over the last years farming has retained its importance, however, lumbering has declined. The rolling farmlands are still cultivated for the annual harvest of potatoes and grains. The town has several trade and service establishments, a district middle/high school, and various recreational facilities.

With the steady growth of its recreational industry, Long Lake has gained in value to residents and visitors. It can accommodate sports activities of the different seasons. To the nature-minded traveler, Long Lake is the home to varied species of birds and fishes. An island in the norhern end of the lake is the center of the fall game migrational stopping point. This migration takes place between October 1 and November 30, and at times reaches a total of 3,000 birds.