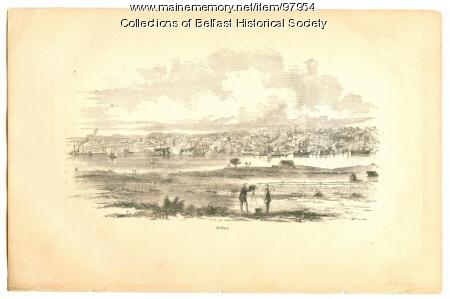 On the eve of the Civil War Belfast was a bustling, prosperous community of more than 5,000 people. Known for its shipbuilding and maritime commerce, it was an important trading center with connections to eastern seacoast ports and world wide harbors.

Nearly 30% of men living in Belfast were employed in the maritime trades. Much of this trade, vital to the local economy, would be interrupted following the news of the attack on and the fall of Fort Sumter on April 12, 1861.

This view of Belfast, taken from the east side of the harbor, was photographed by T. W. Stuart and engraved by Mallory for publication in History and Description of New England. Maine by A. J. Coolidge and J. B. Mansfield, published in Boston, 1860, by Austin J. Coolidge.