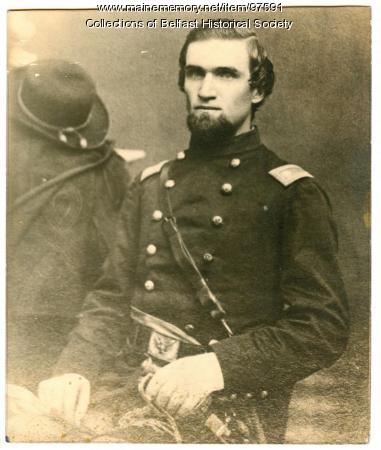 Philo Hersey was born to a farm family in Canton and moved to Belfast as a young man. He was principal of Belfast High School in 1862 when he enlisted as captain of Co. I, 26th Maine Regiment. This was a nine-month regiment fighting in the western Louisiana campaign.

Despite receiving a severe arm wound at the Battle of Irish Bend, Hersey remained with his regiment until it mustered out in August 1863.

He returned to Belfast where he married Arbella "Belle" Johnson and raised two sons. In 1885, Hersey and his family moved to San Jose, California, where he became a successful fruit grower.

Despite living 3,000 miles away, Hersey traveled back to Belfast by train in order to attend reunions well into the 20th century. The History of the Twenty-Sixth Maine Regiment notes, "A better officer never drew sword than Colonel Hersey."