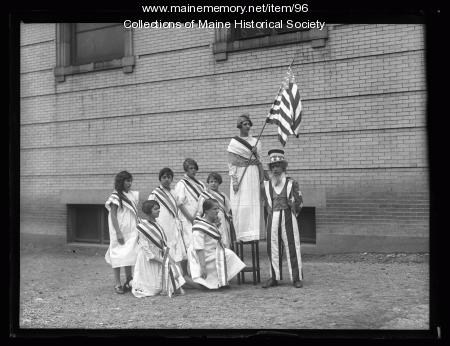 Students posing in costume with the American flag, as part of an Americanization class in the Portland Schools, Portland, 1926.

Beginning in the late 19th century and continuing into the 1920s, Maine's largest city became home to numbers of new immigrants. The Irish who had already made economic inroads, were joined by Italians, Jews, Armenians, Greeks and Chinese citizens. Faced with a variety of problems as well as opportunities, members of each group became part of the American mix. In the process they changed the culture and were, inevitably changed by it. Americanization classes offered in part by public schools and organizations, such as the Boys Club, had various motivations. Some citizens and groups genuinely feared foreign influences would harm democracy and wished to homogenize all newcomers. Others reached out to make the transition easier. The children in this patriotic tableau are part of an Americanization class. Similar liberty cap and Uncle Sam outfits were worn by Yankee children at parades and celebrations in the period.