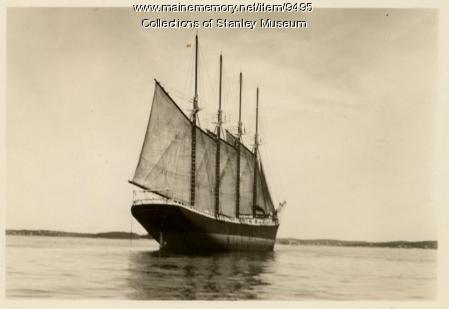 The four-masted schooner, Zebedee E. Cliff out of Boston, sails into Boothbay Harbor sometime in the late 1920s. Perhaps under sail for the last time, the schooner was soon after laid up in Mill Cove with six or more other derelict schooners.

Faced with increasing competition from steam-powered freighters and the scarcity of profitable cargoes during the Great Depression, the "Zebedee E. Cliff" joined a number of other large sailing ships in the vessel graveyard at Mill Cove.

In 1941, the "Zebedee E. Cliff" and another four-masted schooner, the "Maude M. Morey" were towed to Portland for possible refitting. But with the outbreak of WWII, both vessels were purchased by the government, towed out into Casco Bay and scuttled in the outer harbor as part of the breakwater, and as defense against enemy submarines.

The remaining hulls of both vessels were later burnt.

Zebedee Cliff was a Boston-area politician, serving as the Mayor of Somerville, MA, from 1914-1917.