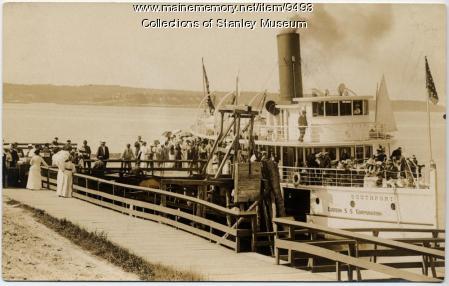 The steamer Southport and her sister ship Westport were built in Boston in 1911 for the Eastern Steam Ship Corporation. Identical vessels 125 feet long, powered by 450 HP steam engines, they were often referred to as the "Twins," recognized even in the fog by their distinctive chime-like steam whistles.

Captain Nahum Brewer piloted the Southport, which, like her twin, served the Boothbay region and the Kennebec and Sheepscot Rivers from 1911-1920, and the Penobscot Bay region from 1920-1934.

After 1934, the "Twins" were split up. The Southport went to Virginia and the Potomac River and eventually was converted to a car ferry.

Commissioned during WWII as the Col. Frank Adams, the Southport was last used as an excursion boat in New York Harbor in the 1950s.

The steamer is shown here making a stop at the Squirrel Island dock about 1912 or 1913.