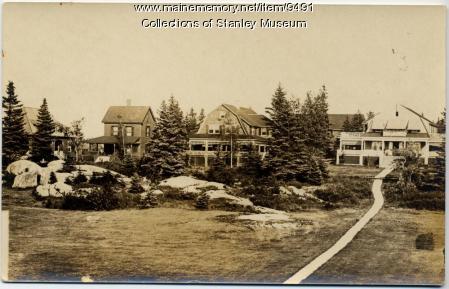 A group of summer cottages along what was known as the Row, overlooking the village center on Squirrel Island, circa 1910.

These three cottages were built in 1908-1909. An earlier cottage, next to the right, was owned by the Foss family, and on the far left is the cottage owned by the Gruener family.

In 1932 a devastating row fire destroyed all of these homes, except for the cottage of Emily Warren to the rear, saved when the wind shifted.

In addition to the three Stanley cottages seen here, F.E. Stanley undertook other building projects on the island, including laying out the first of a series of concrete walkways, one of which can be seen leading up to the steps of his house.

Many of the original boardwalks on the island were later replaced with concrete walks.