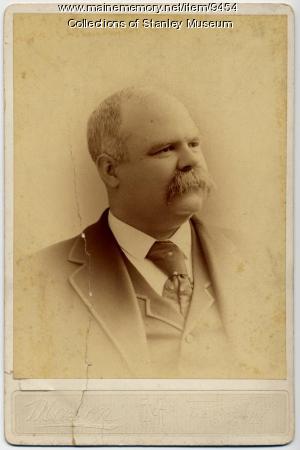 Clarence V. Emerson (1849-1908) was a Maine attorney and served as Clerk of Courts in Lewiston from 1891-1906. Born in Lowell, MA, in 1849, he moved to Kingfield, Maine, in his early childhood and established a life-long friendship with the Stanley brothers, F.E. and F.O. Stanley. After he graduated from Bates College in 1877 and was admitted to the bar in Lewiston in 1881, Emerson became the Stanleys' personal lawyer and also served as Clerk of the Stanley Dry Plate Co. from 1886-1904, and Clerk of the Stanley Motor Carriage Co. from 1902-1906.

Emerson was the son of Rachael A. and Benjamin F. Emerson, the latter a noted 19th century choirmaster and teacher of Maine Singing Schools, including the Kingfield Singing School where his students included his son, Clarence, and the Stanley brothers. Clarence V. Emerson was known locally as a fine bass singer at the same time he was Clerk of the Municipal Court in Lewiston.