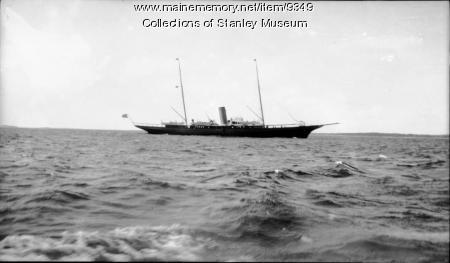 A two-masted steam yacht cruises through Boothbay Harbor off of Squirrel Island, circa 1917-1918. The vessel's identity is unknown, although it resembles the "Corsair II," a steam yacht built in 1899 for J.P. Morgan, and commissioned as the "USS Corsair" during WW1.

This graceful vessel exhibits a transitional design from sail to steam. While its hull is in some ways derived from those of earlier clipper ships, its rigging and central stack belie its reliance on steam power.
During WW1, the U.S. Navy purchased, borrowed, or leased private vessels of this type and pressed them into service as Sectional Patrol Craft. As naval craft they would be used for coastal patrols, escorts, sea rescues, sub chasing, communication and navigation aids, and even as tugboats. At the war's end, many of these yachts were decommissioned and returned to their former owners.