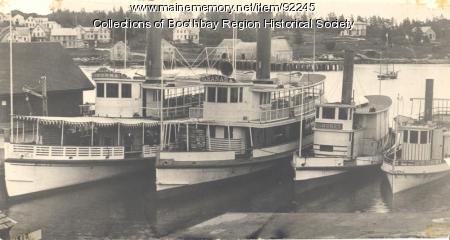 The Wiwurna, the Nahanada, the Samoset (later renamed the Damarin), and the Winter Harbor, all passenger steamboats of the Eastern Steamboat Company, were tied together at the Eastern Steamboat wharf in Boothbay Harbor when this photograph was taken in 1890. The photographer was looking east from what is now (in 2013) the McSeagull's/Mine Oyster area. At the time of the photograpg, Boothbay Harbor's footbridge had not yet been built.