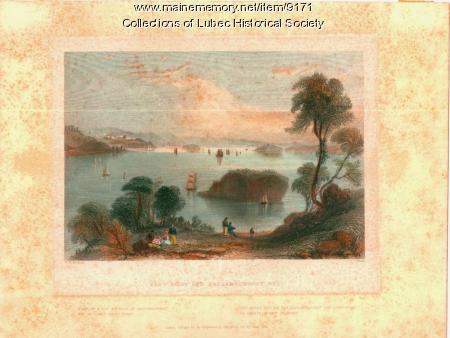 “East Port and Passamaquoddy Bay,” published as Plate 48 in Vol. II of Bartlett’s "American Scenery" in London by Geo. Virtue, Ivy Lane, 1840, from original painting by William Henry Bartlett, 1809-1854. The original painting is about 16 by 25 inches and is owned as of 2009 by the Tides Institute of Eastport, Maine. The dealer Goodspeed’s offered the painting at $75 in its October 1938 bulletin, Volume X, No. 1.
Typical of the era, Bartlett's art is highly romanticized. While clearly recognizable as a view northward from Lubec toward Eastport, the foreground island, known locally as “Pope’s Folly,” is quite small, yet in this view dwarfs the full-rigged ships. Note, too, the size disparity between the ships in front of and to the left of this island.
Born in London, William Bartlett was a prolific and popular painter who saw to it that his images were widely published as lithographs in books of travel. The years 1828-30 brought "Picturesque Antiquites of English Cities." Four voyages to US and Canada starting in 1836 led to "American Scenery" in 1840 and "Canadian Scenery" in 1842.
Bartlett began his career in 1823 as an apprentice to English architect John Britton. In 1855, Britton wrote that “Among English topographical artists there has not been one who has surpassed my early pupil and respected friend the late William Henry Barttlett in the number, variety, and quality of drawings which he executed for publication.”