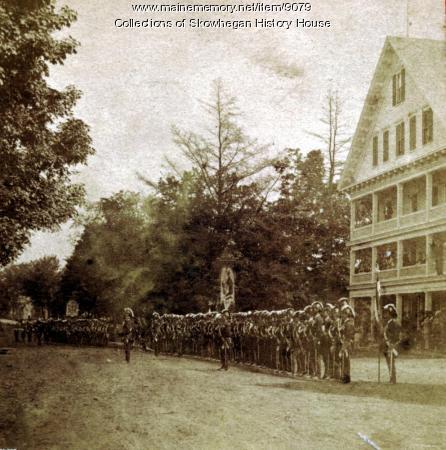 "The Turner House, which occupied this location, has been succeeded by the Skowhegan Municipal Building. Previous to the hotel mentioned another public house stood there, or rather farther back, near the bank of the river. It was undoubetedly Skowhegan's first hotel. Its name and the name of its proprietor seem to have gone beyond recall. The turner house was burned in 1881 and succeeded by Hotel Heselton.

De Molay Commandery is the organization shown in line. It is an interesting coincidence that this same portion of Water Street witnesses in recent years the assembling of the same body, the Masonic Temple being on the opposite side of the stree and not far distant. Few, if any, of the Sir Knights who show in this picture are now living.