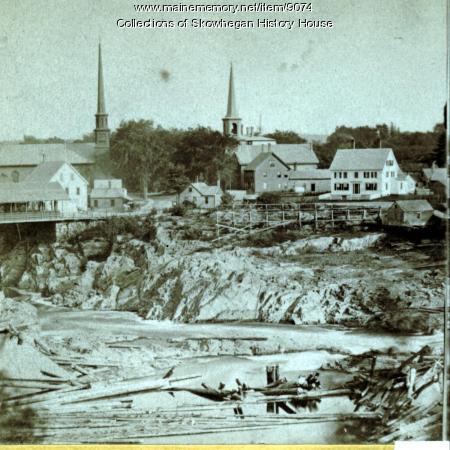 Note framework which extends along the ledges toward small building at the right. These were tenter bars for drying cloth of which was woven in the Stinchfield Mill, which shows in Number 25. The small building at the end of the tenter bars is probably the old match factory, which housed a business discontinued many years ago. The two-story white house at the right of the picture was the residence of John W. (known as Jack) Weston. He was the father of Levi Weston, a prominent and estimable Skowhegan citizen. Another son, Henry, went to Mississippi and became the founder of the H. Weston Lumber Company, a corporation which subsequently grew into the million dollar class. The roof of the Skowhegan High School shows on the right; also the Congregational Church spire. The Methodist Church appears on the left.