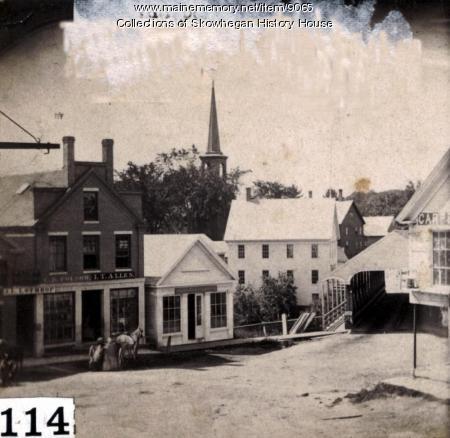 The Skowhegan Bank, center, the town's first banking institution, was established in 1825. It was moved to this building from its first location on the Island. This structure eventually housed also the Skowhegan Savings Bank.

The spire is that of the Congregational Church. It was blown down sometime in the 1890s.

On the brick building to the left of the bank may be noted the signs, "C. B. Folsom" and "L. T. Allen". Mr. Folsom was a prominent citizen of Skowhegan, serving the town in various official capacities. Little is known of Mr. Allen.

The sidewalk is wood and a wooden plank to keep pedestrians out of the mud crosses the street.

The old covered bridge at the right was one of several such structures which occupied this location.

Under the "Carpets and Crockery" sign is a store that was kept by James Farwell, who was eventually succeeded by by N. C. and H. G. Kendall.

Between the bridge and the bank is a Skowhegan Village Corporation building that housed fire-fighting equipment.