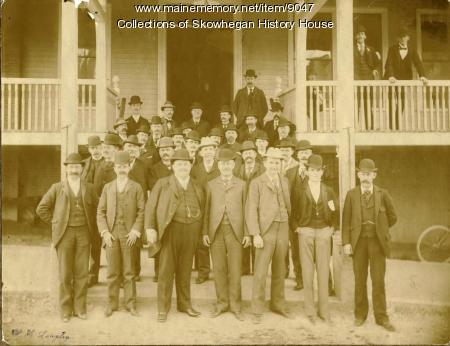 Members of the Imperial Club, composed of traveling men with a few local merchants.

At left, in the front is Joseph Lalley, of Somerville, Mass., salesman for Blanchard & Farrar, a wholesale liquor house, Dock Square, Boston. His brother, Tom Lawley ( there was a variance in the spelling), stands in the rear, just at the right of the Hotel Coburn entrance.

Next to Joe Lalley, in the front row, is Whitman Sawyer ("Whit"), a fancy goods salesman, of Boston. At Sawyer's right is "Pop" Lothrop, a drug salesman. The next man to the left is unidentified. Next is Robert W. Haynes, proprietor of Hotel Coburn, then Fred C. Dow, son of Chandler Dow, a clothing store proprietor in Skowhegan.

The man at the end of the row is unidentified. Looking past the left of Robert Haynes' hat, and just a bit higher up, is Herbert Wentworth.

The fourth person, counting backward from Joe Lalley is Wellington Sprague, a Maine Central Railroad conductor. He is wearing a soft hat and has a prominent mustache. Back of him is John R. Philbrick and at his left is Holman Day, a writer.

A little lower down and somewhat between Philbrick and Day just referred to is Dr. Fred O. Sawyer, a dentist in Skowhegan.

Back in the doorway with a white shirt front is "Professor" Baker, a blackface vaudeville artist. In front of Baker, is George Lynch, and at his right is Walter F. Robbins, a jeweler for many years.