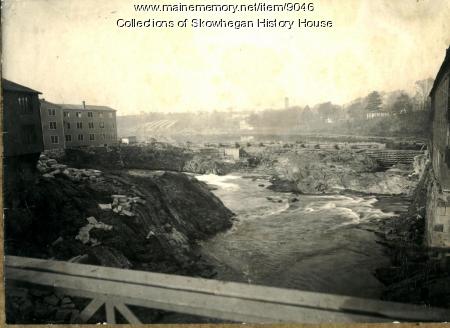 "This was evidently taken during repairs. Granite strewn carelessly along ledges at left should be observed. This was part of a breakwater built by Weston & Brainerd to protect the grist mill (extreme left) at the time owned by them. Behind this granite wall was an area used by the firm mentioned for storage purposes. The wall was destroyed by the freshet of December 1, 1916.

Other buildings at left stand upon a location which in earlier days was occupied in part by the Stinchfield carding mill. These structures and those which followed them were used for the manufacture of doors, sash, blinds and other structural material. One of the firms was McQuillan & Pooler and in later years Nathanel McQuillan alone carried on this business.

The buildings on Elm Street have been thoroughly described in Number 37, on page 25.

The standpipe of the Skowhegan Water Company dimly shows against the skyline. this indicates that the picture was taken subsequent to 1884. Another building, dimly visible on Neil Hill, the Patten residence, fixes the date even later, as that was not erected until 1904. To the right of the Patten home may be seen the old Howard or Neal homestead.