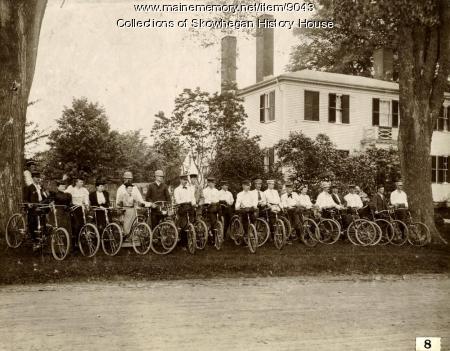 Members of the Skowhegan Wheel Club on Elm Street, in front of the old Parlin homestead.

From left are Fred C. Dow, slighly in front of him, G. E. Durrell, later Postmaster of Skowhegan; Grace E. Wentworth, and Durrell's wife. The machine they have is a tandem of English make, owned by Herbert Wentworth, Miss Wentworth's brother.

Next is Gertrude Goodwin, who later married Blaine E. Owen of Augusta, and after his death married Edward Mayo of Dover-Foxcroft; then Lizzie Williams, Mrs. Dyer, Eolia Snow Bray, Miss Holmes of Northeast Harbor, who worked at Patten drug store on Water Street and became a registered pharmacist; John W. Steward (behind her).

Many of the club members were merchants or worked in Skowhegan businesses.