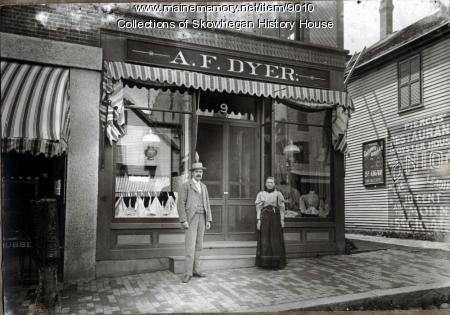 "This is on Madison Avenue... Mr. Dyer, whose sign appears over the doorway, stands at the left, and his saleswoman, Mrs. French, at the right. This building was previously occupied by S. D. Arnold... It was later purchased by Guy F. Debe and during his occupancy was the scene of several fires. It is now a fruit store, of which Arthur Lebel is the proprietor.

The brick building at the left is an ancient landmark. Its most famous occupant was Henry Plummer, a leading dry goods merchant for many years. At the present time the occupants are Robert Hall, barber, and Jones' Restaurant.