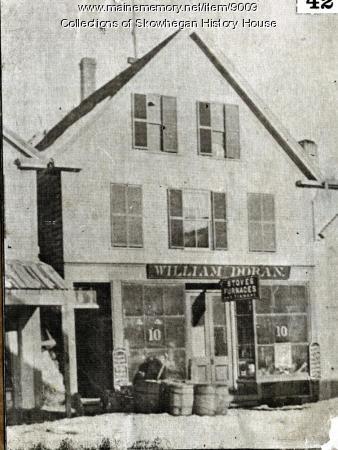 "The store which carries the sign of William Doran and a smaller overhanging sign, 'Stoves, Furnaces, and Tinware,' has at this date been replaced by a brick front, which is part of the J. P. Merrill Building. It is now occupied by D. A. & W. E. Porter, insurance agency, and Robert Boyd, jeweler.

Mr. Doran was an old time Skowhegan merchant, who occupied several locations. He was at one time on Water Street and during the last years of his business career on Madison Avenue, where he was succeeded by Fred A. Wood, who is still carrying on a similar business at the same location.

The rather rough wooden shelter at the left is undoubtedly in front of what was afterward the George B. Fairgrieve block. This structure is still standing, having been enlarged and rebuilt, and is at present occupied by a First National Store.

At the right of the Doran store may be seen a small portion of what later became the Sampson Corner Drug Store.