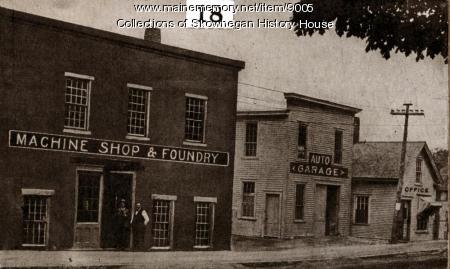 Skowhegan, during the late decades of the 1800s, hosted a thriving metal working industry. The product was high quality sharp edged tools and athletic equipment. Chisels, axes, and ice skates were among those items which were shipped nationwide. The Williams Tool Co. was another Skowhegan manufacturer of prominence. R.T. Patten here picks up the Foundry narrative at a later date.

"This shows the machine shop mentioned in Number 9003, some years later. Substantial alterations have taken place. A second story has been built, which, however, did not extend more than twenty feet from the front. It will be noted that the grade of the street, as shown by the sidewalk, has been raised. One or both of the buildings to the right are comparatively new structures.

At the time of the picture Hackett & Witham were the occupants. These gentlemen show near the doorway, Mr. Hackett being to the right. They added a garage and auto sale business to their foundry enterprise. The pipe which projects outward from the foundry was a water conduit, for street sprinkling purposes.