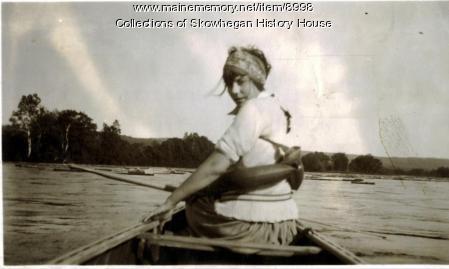 In 1928, Roland T. Patten, owner/editor of the Independent-Reporter newspaper in Skowhegan, commissioned a series of photos to be taken of himself and friends canoeing at the Carrying Place Rips, a historic spot on the Kennebec River upstream from Moscow, Maine. This site was then slated to be flooded by the Wyman Dam which was completed in 1931. Here Patten describes an event from that series.

"Daughter of Dr. and Mrs. J. Leon Williams, of Concord haven (Embden) and New York City. She is a bow passenger in a canoe journey made in 1928. Miss Williams has since married Warren Hymer, an actor of some note and son of John B. Hymer, widely known as a playright. Mr. and Mrs. Hymer are both in theatrical work and their home is at present in Hollywood, California. Miss Williams is wearing a life belt.