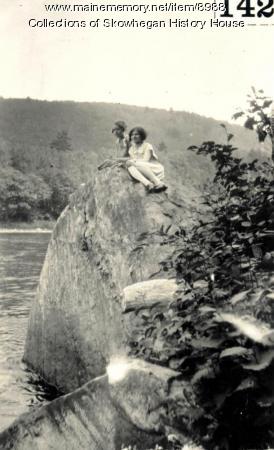 "The big boulder in this picture is occupied for the moment by Miss Eunice F. Patten, of Brooklyn N.Y., and Miss Catherine McCarty, of Skowhegan. They are there for the purpose of going down river in a canoe. A little later they embarked, under suitable guidance, for twelve mile voyage, at very start of which comes the famous Carrying Place Rips. They were so named because it was here that Benedict Arnold, in his Quebec expedition, in the Fall of 1875, left the river and carried over the ridge to the west.

In 1928, Roland T. Patten, owner/editor of the Independent-Reporter newspaper in Skowhegan, commissioned a series of photos to be taken of himself and friends canoeing at the Carrying Place Rips, a historic spot on the Kennebec River upstream from Moscow, Maine. This site was slated to be flooded by the Wyman Dam which was completed in 1931. Here Patten describes an event from that series.