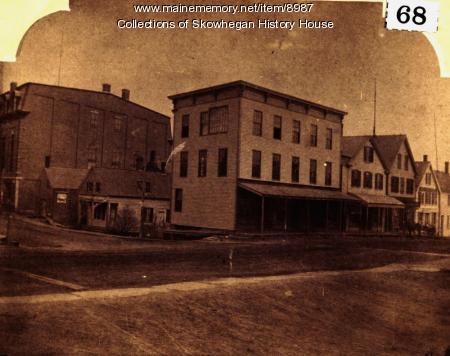 "This must have been taken from Elm Street, near Hotel Coburn. Coburn Hall is prominent in the distance. Next to it the Otis Farrington carriage shop. Then comes the old Rich homestead, still standing. Then we have a vacant lot, now occupied by the Reporter building, and next the wooden structure which still occupies the same corner. Note on this view the wooden shelter. A like protection appears on the next building. Both of these shelters were removed many years since. The second front on Madison Avenue was for years the John A. Colby store. At present time it is occupied by the Quality Bakery. The next building was owned for many years by George B. Fairgrieve, who kept a restaurant on the street floor and lived in the second story. It was later rebuilt and a hall, much used for dancing, occupied the third floor. Next to the right is a structure built by J. Fred Pollard. It has now been replaced by a brick building, a part of the J.P. Merrill block. At the extreme right is Sampson's corner, then a wooden building and for a time in ancient days occupied by J. Priest & Son. "