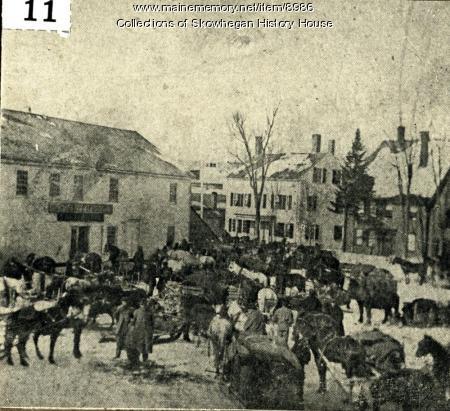 "The above title is selected because the vehicles in the scene are chiefly loaded with potatoes. There had been a rise in the price and they were rushed in here from all directions. On the left may be seen the old Eben H. Neal store, on the location now occupied by the Griffin Building. Like the structure just mentioned, it extended through from Water to Russell Streets. This view is of special interest because it indicates that at the time there were no buildings between the Neal store and the present railroad crossing. The picture does not go quite far enough to the right to make this entirely certain, but there must have been at least a wide open space which is now completely covered.

"The Elm House, later the Skowhegan House, on Russell Street, is easily identified. At its right is one of the old Morse buildings."