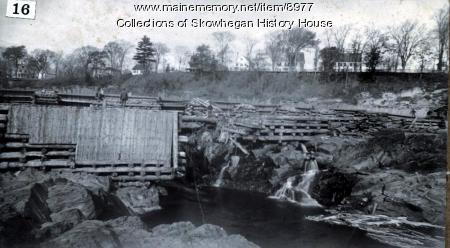 This photo shows the North Channel Dam under repair during the summer of 1902. This followed the destructive "December Freshet" of 1901 that damaged or destroyed nearly every dam and bridge in the Kennebec Valley. The following quote by R.T. Patten describes the homes along Elm Street viable in the background.
" The building on Elm Street at the extreme right is the Parlin homestead, afterward owned by the American Woolen Company. Next is the McClellan place, now the home of J.R. McClellan. Then we find the Philbrick homestead, formerly occupied by William Philbrick and now by his son, Fred R. The next is the Benjamin Dodge place, for many years the residence of Mrs. Annie P. Hackett. Then we have the residence of Hon. S. W. Gould, built on the lot formerly occupied by the Fletcher homestead. The next is the Harry Baker place, occupied at the present time by his widow. Then comes a house built by the late S. W. Lawton, for many years the home of the late Albert G. Blunt, now owned and occupied by J. Wallace Blunt and family. The house at the extreme left is the Henry Wyman homestead. Here was born Hon. Henry A. Wyman, of Boston, through whose generosity a fund was established to make this collection possible in its present form. It was many years ago sold to the late Benjamin F. Baker and is at present occupied by Major and Mrs. John W. Folger, Mrs. Folger being the daughter of Mr. Baker just mentioned.