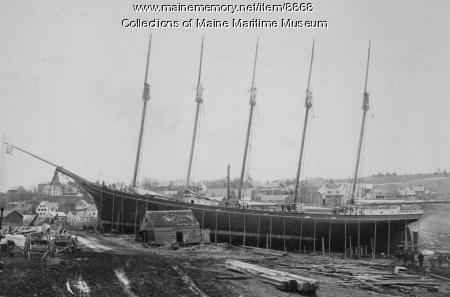 The photograph shows workers preparing to launch the five-mast schooner Gov. Ames from the Leavitt Storer shipyard at Waldoboro on Dec. 1, 1888.

She was the first five-mast schooner built on the East Coast (an earlier one was built in the Great Lakes). Built of wood, she measured 1,779 gross tons, with a register length of 245.6 feet. She was a cargo-carrying coastal schooner.

In December of 1909 she was wrecked near Cape Hatteras, North Carolina, with the loss of eleven lives.

In this picture, smoke on the right is coming from the stack of a tug attending the launching.