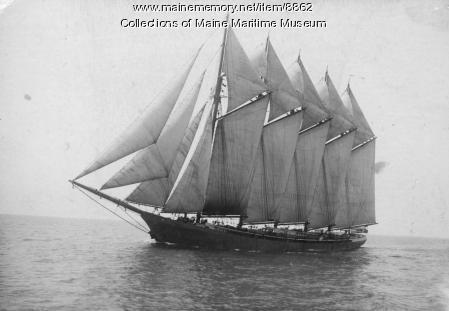 KINEO was the only steel five-mast schooner built in the U.S. Launched in 1903, she was built and owned by Arthur Sewall & Co. of Bath.

KINEO was the last vessel built in their shipyard. Intended for ocean voyages as well as the coastal coal trade, she made a round-the-world voyage in 1905-1906, stopping at the Philippines, Australia, and Hawaii. After that, she stuck mostly to the East and Gulf Coasts of the U.S.

She measured 2,128 tons, register length 259.5 feet. The Sewalls sold her to The Texas Co. in 1916. Gasoline engines were installed and the vessel was renamed MARYLAND.