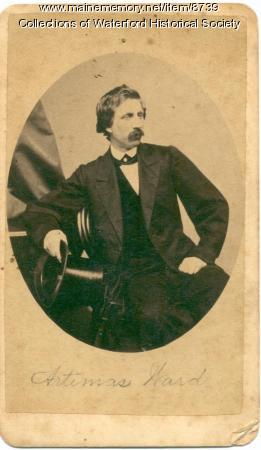 Charles Farrar Brown, who wrote and performed as "Artemus Ward," was the son of Levi and Caroline E. Brown of Waterford.

Levi died when Charles was 13, and Caroline apprenticed him to a printer in Littleton, New Hampshire (she had previously done the same with his older brother Cyrus). He went on to work in Skowhegan and Norway, Maine, then in Boston, and then meandered west, moving from job to job as printers did in the 1840's and 1850's.

At age 23, in 1857, he arrived at the Cleveland Plain Dealer offices where he became associate editor. In 1861 he became editor of the leading national comic weekly Vanity Fair, in New York.

Ward was by that time reinventing himself as a comic "lecturer," and when the magazine failed he turned to full-time performing. By the end of the Civil War he was regarded as America's best humorist, and when he was able to travel to London to perform at the end of 1866 it was a confirmation of his status.

But he was already seriously ill with tuberculosis when he arrived in England, and died on March 6, 1867, aged 33, mourned on both sides of the Atlantic.