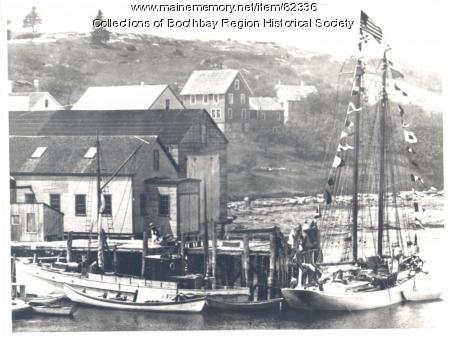 This photograph shows The Medric and the Bowdoin, two of Hodgdon shipyard's longest-lived vessels, tied to the same wharf one day in East Boothbay in the early 1920s. The 61 foot double-ended Medric, on the left, built for Lubec's Seacoast Canning Company, was launched March 28, 1919. She shortly went to the R.J. Peacock Canning Company, also of Lubec, where Sumner Hartford was her captain for 43 of the 75 years she carried herring.

On the right is the 88 foot Arctic exploration schooner Bowdoin, designed by William Hand for Donald MacMillan and launched April 9, 1921. This photograph was taken before the crow's nest was added in 1924. Signal flags were usually displayed when the Bowdoin was departing on an expedition north, of which there were 26.