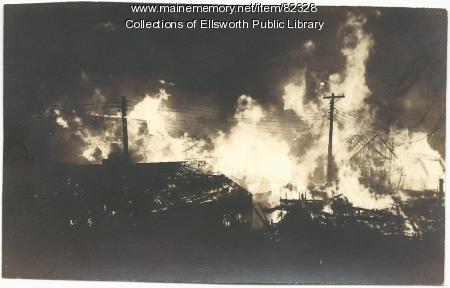 This postcard depicts the core of downtown Ellsworth at the height of the Great Fire of 1933. The fire began on Sunday, May 7, 1933 when it was set by Norman Moore in the Bijou Theater.

The fire would destroyed 130 buildings, or most of Ellsworth's downtown. The flames leapt, often to twice the height of the buildings they consumed.

It took the Ellsworth Fire Department, along with the aid of the Bangor, Bar Harbor, Belfast, Blue Hill, Brewer, Bucksport, Castine, Northeast Harbor, Old Town, and Southwest Harbor fire crews, until about four in the morning on Monday, May 8, to bring the blaze under control.

Firefighting efforts were hampered by strong winds, below average temperatures, and congested roads as people flocked to see the spectacle of the blaze.