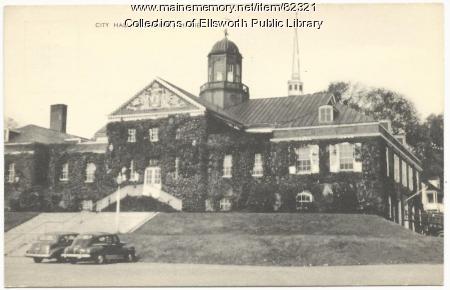 This postcard depicts the new City Hall for Ellsworth. Completed in 1935, this Colonial Revival style structure replaced Hancock Hall, which was destroyed in the Great Ellsworth Fire of 1933. Designed by Philadelphia architect Edmund B. Gilchrist and constructed by E. L. Shea (Emmons Lawrence Shea) of Ellsworth, the new city hall set the tone for the rebuilding of Ellsworth's downtown center.

Visible at the apex of the building, above the ivy bedecked brick facade, is the largest wood carving of the Maine State Seal in the state.

The building is still used to house the city's municipal offices today, (2013), and remains open to the public at 1 City Hall Plaza in Ellsworth.