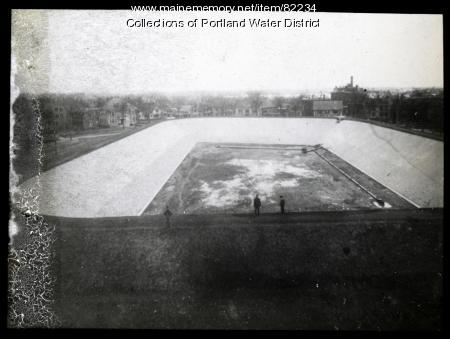 In 1869 the Portland Water Company built the Bramhall Reservoir between Brackett, Vaughan, and Chadwick Streets in Portland to hold water pumped into Portland from Sebago Lake. In turn, the water was then pumped into city distribution pipes from the reservoir.

In 1882, the reservoir suffered a break and water leaked down the hill towards Deering Oaks Park. The reservoir was repaired, but continued efforts by the Portland Water Company were made to keep the reservoir in reliable working order. It is believed that this image was taken in 1902 when the reservoir was again reinforced. An engineer from Boston, Percy M. Blake, oversaw the work which entailed paving with granite blocks and adding automatic valves to control water flow. The capacity of the reservoir was increased with this renovation from 8 million gallons to between 10 to 12 million gallons.