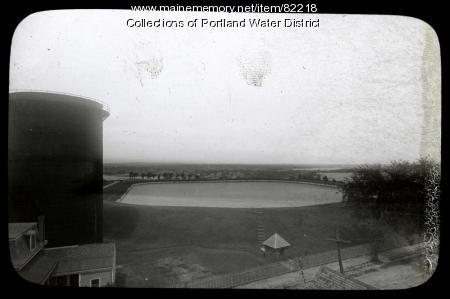 The Portland Water Company began distributing water to Portland in 1869 by pumping water from Sebago Lake into the Bramhall Reservoir in Portland. From the Bramhall Reservoir, water was then pumped to City distribution pipes. In the mid 1880s the population of Portland had grown such that the need for a second reservoir was necessary. Work began on a reservoir, located between North and Sheridan Streets, that would be called the "Munjoy Hill Reservoir".

The Munjoy Hill Reservoir was completed in 1889 and had a capacity of 20,000,000 gallons. Because of a defective overflow, the reservoir burst in 1893. The reservoir was rebuilt and strengthened. This reservoir remained in operation on Munjoy Hill until 1970 as an emergency back up to the public water supply, although during its last decades, the water it contained would not have been suitable for human consumption without significant chemical purification.