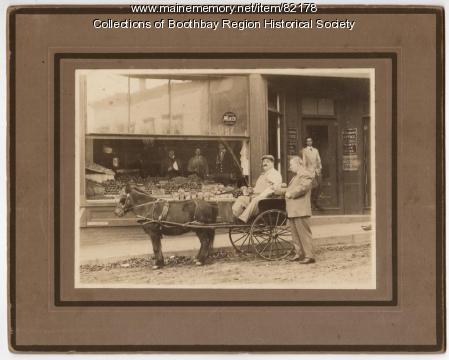 S. Louis Carbone immigrated to Beverly, MA in 1880 from Genoa, Italy. In 1909 he came to Boothbay Harbor and opened a fruit store. In this circa 1920 photograph, taken in front of the store's second location on Commercial Street, Carbone is accepting $5.00 for winning a bet that he made with his friend Bert Albee, on the right (according to Carbone's daughter, Josephine Carbone Beckwith). The bet was that Albee's pony would not be able to pull the 250-300 pound Carbone around the block (which included a steep hill), while he was sitting in the cart.