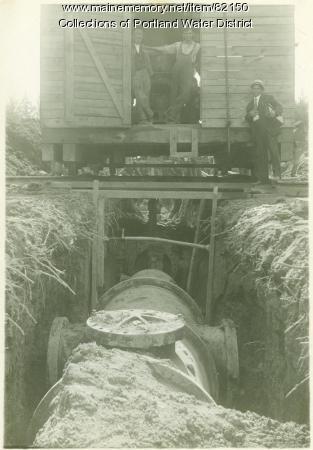 When the Portland Water District acquired the Portland Water Company in 1908 one of its first priorities was to increase water supply to its customers. After consulting with engineer Allen Hazen from New York, the District decided to install a 42” cast iron transmission main to be constructed from Sebago Lake to Portland to better serve the areas of Portland, Deering, South Portland and Cape Elizabeth with the remaining customer base to be supplied by the present mains and reservoirs.

In this photograph (location unknown) the cast iron pipe has been placed in a trench. The next step would have been to lead and caulk the pipe sections before backfilling. The new transmission line was completed in 1912.