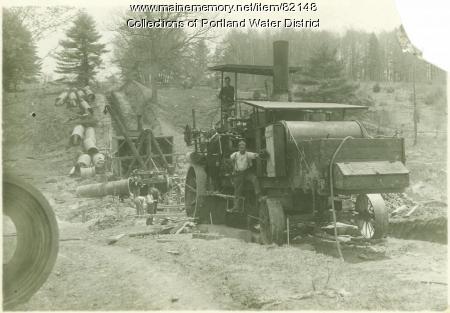 The United States Cast Iron Pipe and Foundry Company of Philadelphia Pennsylvania, won the contract for furnishing the cast iron pipe and specials, and John C. Tierney, of Hoboken New Jersey, was awarded the contract for hauling and laying the cast iron pipe and fittings. The Water District also hired engineer Allen Hazen, of New York, as a consultant for this project.

In this photograph workers are shown with lengths of pipe next to the excavator that was used to dig the trench for the pipeline. The transmission line was completed in 1912, after approximately one year of construction.