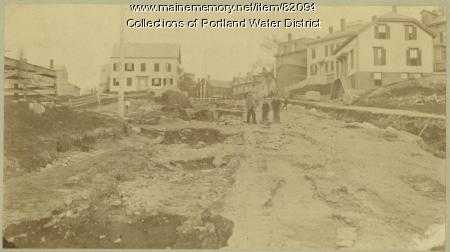 The Bramhall Reservoir was built in 1869 by the Portland Water Company to hold water pumped from Sebago Lake. The water was then pumped from the Reservoir to Portland city distribution pipes.

This photograph appears to show street damage from a leak or break in the Bramhall Reservoir. There was a significant break in June 1882 that caused damage to several homes in the area. Though this photo has a pencil mark noting "Bramhall 1888" on the accompanying mat, it is assumed this photo was taken in 1882 on the former Grove Street, Portland, which is now Deering Avenue, looking up toward Congress Street. This assumption is made because the Portland Daily Press ran a news article on June 10th, 1882, and in it describes the path of the water as it ran down the hill from the reservoir towards Deering Oaks Park and it is consistent with the photo.