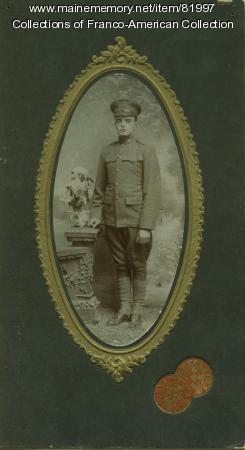 This photograph of Lewiston-born Antonio Sylvain was taken in Tientsin, China some time between 1912 and 1938, when the US 15th infantry regiment was stationed in the city. Notice the photography studio's mark in the bottom-right, which is written in English and Chinese.

Tientsin, now Tianjin, was a very important city coastal city as it was located along the Hai River, which connects to the Yellow and Yangtze Rivers via the Grand Canal. Since the 1870s, other countries took great interest and made many efforts to gain permission from the Chinese government to occupy Chinese ports.

In the early 20th century, the 15th US Infantry regiment was posted in Tientsin as part of an international contingent designed to protect Europeans from attacks by anti-Western rebels known as "Boxers." The regiment was present in China during a period of intense conflict following the fall of the ruling Qing dynasty in 1912. The effect of that conflict would enable the rise of Mao and the establishment of a communist regime in China in 1949.